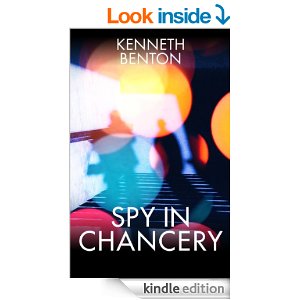 Spy in Chancery is a highly intelligent Cold-War-era espionage thriller set in Rome in the 1970´s where intelligence tricks such as, pseudonyms, dead letter-boxes, and secret passwords were used along with a great number of code breaking technologies.

Peter Craig is an undercover policeman who is called in by the Secret Security Service (S.3) to help them find a KGB spy somewhere in the British Embassy, as one of their MI6 agents has just been murdered. Craig has no connection with the Intelligence Service or with BX.32´8s activities and the S.3 supply him with the perfect cover story on his mission to Rome where he is expected to attend an Interpol meeting that will last for two weeks and also carry out a security inspection at the British Embassy. After a short briefing on his forthcoming mission Craig arrives in Rome where he meets another security agent who will help him along with Sir Watkyn (Ambassador of the English Embassy) who is keen to find out which member of his staff is the traitor, despite the fact that he has a great dislike for the spy business. Craig soon begins to narrow down a list of possible suspects and has them followed in an attempt to gather evidence against them and eventually discovers a breakthrough that will give him an advantage and keep him one step ahead of the spy, unaware he may be risking more than his own life and the lives of more innocent people in this complicated game of high-level politics, covert missions and secret agency cover ups.

In summary, “Spy and Chancery” is an exceptionally well written espionage thriller with a number of un-predictable twist and turns that will leave the reader turning those pages well in to the night to discover what happens to these wonderfully strong, well-developed and likable characters’

This is the first book I have read in the Kenneth Benton Spy Series and can honestly say I am hooked and cannot wait to read more of this late authors work.